Be Careful Where You are Pointing That Thing

Museums...airports...government buildings...what do these places have in common? Most of them are areas where you are not allowed to roam about and freely take photographs. There are also certain geographic locations in which it is culturally forbidden to freely make pictures of people and places too. Okay, okay...before you head to get your copy of the Constitution or national charter, just calm down a minute and spend time learning why you have to be careful where you point and "shoot". 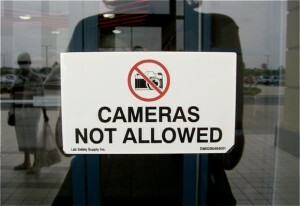 Rights and Customs In most of the modern Western world we have this wonderful idea known as "freedom". We have "rights" that give us the power to do as we please, and whenever we please, but always within certain limits. These limits are often called "laws". Fine, you get that, but why would it be forbidden to walk into a place like the National Gallery and take shots of your family in front of famous paintings? Well, consider that for a few moments...those paintings are owned by a designated group that controls how the images are displayed and put into the public forums. If anyone could walk in and take a snapshot of a famous piece of artwork it would economically and ethically impact the owners and managers of the works. There is also the cultural issue. In different societies around the world it is not considered acceptable for someone to have his or her photograph made. Whether it is due to a religious or spiritual belief (i.e. the camera captures a portion of someone's soul OR it is immodest and improper for someone to pose for a picture) is not important. The fact of the matter is that certain people REALLY don't want you to point and shoot at them. Finally, consider the security factor. Things are not as liberated as we might think. Just consider the "I'm a Photographer, Not a Terrorist" website that popped up in the UK. It is in response to the restrictions on the use of cameras in many public areas. Traveling with a Camera You probably understand your own native customs regarding photography, but when traveling it is going to become pretty important that you know how to behave before you arrive. Yes, we know that it is very tempting to point that compact digital camera covertly at the people in prayer or the wildly dressed natives, but don't succumb if it could lead to trouble. Also, don't feel that you have photographer’s rights in the same way that members of the press have certain rights. If you are outside of your own country it is going to matter very little if you are used to dragging the DSLR with you wherever you go. Additionally, you should apply this same theory even when in your own country too. For instance, Americans will enter places like Amish or Mennonite farms and believe that they are allowed to make as many images as they want. The fact of the matter is that most Amish do not like photographs and will not pose. So do a little research before you travel and if all else fails...ask politely if you can take a photo of someone before snapping away. Finding out the "where and why" of travel photography before leaving home can spare you a lot of headaches, hassles, and difficulty. It also keeps the camera safe too!