Artist Thomas Kinkade died at the Age of 54 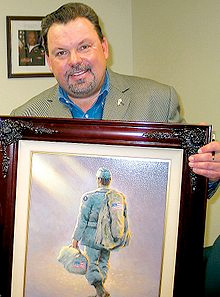 Thomas Kinkade, the famed "Painter of Light" died unexpectedly on Friday at the age of 54. Kinkade died at his home in Monte Sereno, an affluent neighborhood near Los Gatos in the Bay Area. His family attributed his death to natural causes. Officials say that the Santa Clara County coroner will perform the autopsy to figure out the cause of death. Millions of his paintings and prints hang in homes around the world, popularity that translated to more than $50 million in earnings for the artist from 1997 to 2005 alone. Known for his generosity and spirituality, he once gave an Anaheim widow $25,000 worth of his art to replace what she'd lost in a fire. Kinkade's fame and fortune, however, were complicated by personal and business struggles. In the last decade he had been locked in legal battles with former Thomas Kinkade Signature Gallery owners, some of whom accused him in lawsuits of trading heavily on his Christian beliefs even as he drove them into financial ruin.
For more than a year, Kinkade had been separated from his wife, Nanette, with whom he had four daughters. "The Thomas Kinkade story and legacy is a story of triumph and tragedy, which I believe that everyone can gain from paying attention to," said Terry Sheppard, a former Kinkade friend and company vice president who parted ways with the painter in 2003. "Thom provided a wonderful life for his family," his wife, Nanette Kinkade, said in a statement. "We are shocked and saddened by his death." In addition to his wife, he is survived by their daughters, Merritt, Chandler, Winsor and Everett, and a brother, Pat, who worked for Kinkade's company. On Saturday, Thomas Kinkade Co. officials sent a message to distributors that the business will continue, saying that "his art and powerful message of inspiration will live on." "He lived life to the fullest," said Ken Raasch, Kinkade's former business partner who co-founded Kinkade's company more than 20 years ago. "He was a very eclectic character, an amazing artist who was not a stereotypical man in any sense. He created his own mold, I'd say, and I think we were all blessed because of that."