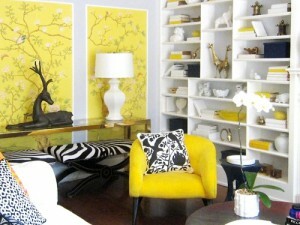 "I hate painting". That was it...all my friend could say about her most recent redecorating project was that she had hit a brick wall because she didn't want to break out the tarps, brushes, tapes, and buckets of paint. It was hard to blame her because it is such a messy and tiring endeavor that can easily be ruined by any number of problems - including the choice of a hue, color, or shade that is not quite what you wanted. So, we put our two heads together to come up with a solution and had a "eureka" moment...we would forgo the painting and do a "color focus wall" that used photos and colored canvases from the group of hues that appealed to her esthetic. There would be no paint involved, and only a tremendous amount of fun instead. The dilemma was that she didn't want a clutter of images filling the space because a lot of frames would downplay her intentions. The solution? Canvas photo prints and images reprinted on fine art photo paper. These could be framed and mounted or left on their own, and used in groups to give a sense of color without a full wall of one particular shade. 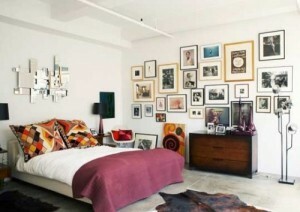 We decided to take all of the color samples from the paint store and make a sort of storyboard of them (we used the Meaning of Colors website for guidance too). These resources and details really inspired the images chosen, but they did not limit what was used. For instance, she had a shot from a vacation to the Middle East that was full of sandstone hues and pale pink reflections at sunset. We enlarged a portion of the shot because it contained the colors and textures we wanted and then had it printed as a photo on canvas. We used that image as one of the solid blocks of color and began looking for other custom photographs that contained accents and similar hues. We ended up using twelve individual canvas photo prints which were hung in an evenly spaced group along one wall. This created a single wall that presented the illusion of being painted with a pale pink or sandy stone color, but which was actually still the basic "off white" that my friend had detested for so many years. 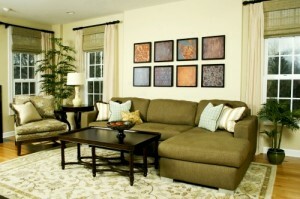 How to Copy Our Idea

Anyone can take this idea of ours to make a colored focus wall in their living spaces. You don't have to take recognizable images either...for instance, let's say you want a blue focal wall. You could take a snapshot of reflections on water, the sky at sunset, evening stars, a piece of gorgeous fabric, a close-up of an eye, and just about anything else that appeals to you in terms of color. The key is to make it obscure and all about the hue of blue (or whatever shade you have chosen). Colors have meanings, as we learned, and you can fix a house with color, as the House Beautiful website told us, but only if you pay attention to the feelings created by your choices. Then get the images enlarged and printed on fine art photo paper or as a photo on canvas. This is stretched over a museum quality frame and can be left without a decorative frame if desired. Arrange them in a way that fills the space but doesn't clutter it and step back to admire your handiwork! Photo Links: Maison21 - http://maison21.blogspot.com/ Pulp Design Studios - http://pulpdesignstudios.com/ Chelle Design Group - http://chelledesign.com/