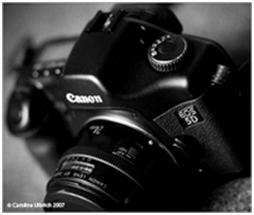 "How many megapixels?" It still seems to be the million dollar question for most people when it comes to digital cameras, from point and shoots, to digital SLRs, to even your camera phone. Why just yesterday I had a friend flaunting a new phone sporting a hefty 2 megapixels. Yes, these little, seemingly microscopic, pixels are reproducing at alarming levels even in our phones. In less than 10 years we've seen the number of pixels explode with most camera manufactures now offering over 10 megapixels. Do we really need 10, if so, why not 20? Is more really better? And if they're so "mega" why the heck wouldn't a single megapixel suffice? How do you calculate megapixels? Why do we consistently want more of these pixels? And, more importantly, how many do we need to print out something worthy of hanging on the wall? Let's first quickly define a megapixel. The word megapixel can be broken up into two words Mega, in this case meaning 1 million, and pixel, an abbreviation for picture element. The "pix" portion arises from the common abbreviation for picture. A pixel is basically a little dot that when combined with a bunch of other little dots, one million in the case of 1 megapixel, produces what our eyes recognize as an image. Obviously it takes a lot of these little dots to produce a sizable image. The first thought that comes to mind for many when the word megapixel is mentioned is image quality. Image quality might also be translated to image resolution. Cameras differ when it comes to how many megapixels it takes to give a certain resolution. In other words, a 4 megapixel photo taken by a Canon camera will more than likely not have the same resolution as a 4 megapixel photo taken by a Sony camera. This is due primarily because the image capturing sensor within each of the cameras differs between manufactures. You can usually determine your camera's megapixel to resolution ratio by looking in your owner's manual or visiting your camera manufacture's website. We do know that the number of pixels present directly corresponds to an image's maximum resolution at different sizes. As you increase the size of the photo you actually magnify, or zoom in on, the pixels. Thus, theoretically, the more pixels you have the better the image will look at higher resolutions. When printing your image, a printer attempts to recreate it on paper by translating megapixels or image resolution to DPI (dots per inch). DPI is the printer's measure of printing resolution; in particular the number of individual dots of ink a printer can produce. At around 250 DPI and above the human eye has trouble seeing these individual dots of ink and the printed picture appears as one large image. At Canvas Press we print the majority of our images at a minimum of 240 DPI. So, what is the relationship between resolution and DPI and what is required to produce a clean crisp printed image? New York Times technical editor David Pogue conducted an interesting experiment that I believe can help give us a better understanding of how resolution relates to DPI. In his experiment Pogue printed the same picture taken 3 times by the same camera (16.7-megapixel Canon-1Ds Mark II) but at different resolutions. He took one at 7 megapixels, one at 10 megapixels, and another at 16.7 megapixels and then printed the pictures at a poster size of 16x24 inches. The pictures were displayed in a public library and judged by the passing public. According to his results, only 3 out of his 50 test subjects were able to accurately distinguish between the lower and higher resolutions (New York Times). Pogue doesn't go into detail on the DPI that each image was printed at but by using some basic calculations we are able to determine the maximum DPI each photo could have been printed at. To calculate the maximum DPI that an image is capable of printing at we first need to gather the image's resolution and the size at which we would like to print the image at. Pogue had 3 different image resolutions resulting from three separate photos taken at 7, 10, and 16.7 megapixels. Per Canon's website the Canon-1Ds Mark II captures images at the following resolutions (Canon EOS-1Ds Mark II):

And we know that the images are then printed at 16 x 24. To calculate the DPI of each photo we divide image resolution by the print size.

So, 7 megapixel images on the Canon-1Ds Mark II have a maximum resolution of 3072 x 2048. Using this let us calculate the highest DPI that we can print this image at without modifying or enhancing it. 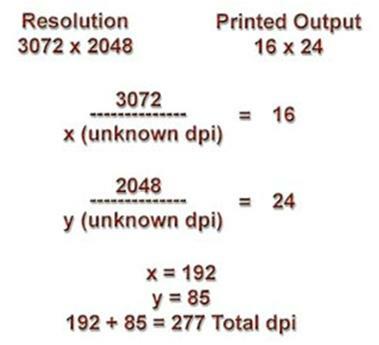 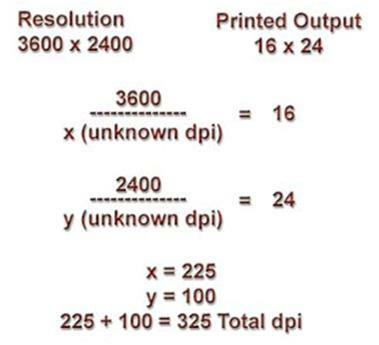 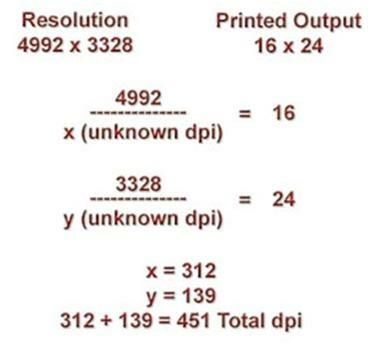 So, taking in mind that the human eye can only detect color squares at around 250 DPI and lower, you can see how Pogue's test subjects might have had troubles differentiating between the different images. However, if we were to print these images at a size lager that 16 x 24, maybe something like a 30 x 40, you would probably be able to tell the difference between a 7 megapixel and a 16.7 megapixel image. But these larger sized images are usually not designed to be viewed close up but rather at a distance of at least a few feet or so. And, at that distance you would probably have problems differentiating between them. I think Pogue's experiment helps to clarify the point that regardless of how many megapixels are used in capturing an image or the resulting image resolution, the human eye has problems discerning any enhances in quality over about 250 DPI. Any printed image that meets or exceeds this standard DPI will appear sharp and clear. Now that you can fairly quickly determine the probable DPI that an image will print at, let us suppose that one of your favorite shots was taken at only 4 megapixels, a 2946 x 1664 resolution, and that you would like to see it on a beautiful 30 x 40 canvas gallery wrap. A 2946 x 1664 resolution image could normally only print out at a maximum of 140 DPI at 30 x 40. At that DPI the printed result will more than likely not meet your expectations and may even appear blurry or pixilated. 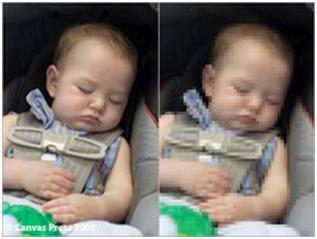 Fortunately, digital images can be enhanced and at Canvas Press we have the ability to take lower resolution images and resize them to a quality capable of printing at over 250 DPI and at sizes much larger than even 30 x 40. That 4 megapixel photo might even be billboard material after we work our magic on it. Let us help you worry less about megapixels, resolution, and DPI and concentrate rather on getting that memorable photo focused in and framed correctly. From digital photo enhancements to large format printing, we specialize in ensuring your photos come out looking spectacular on canvas.